Grolsch returns to the U.K. with new brand identity 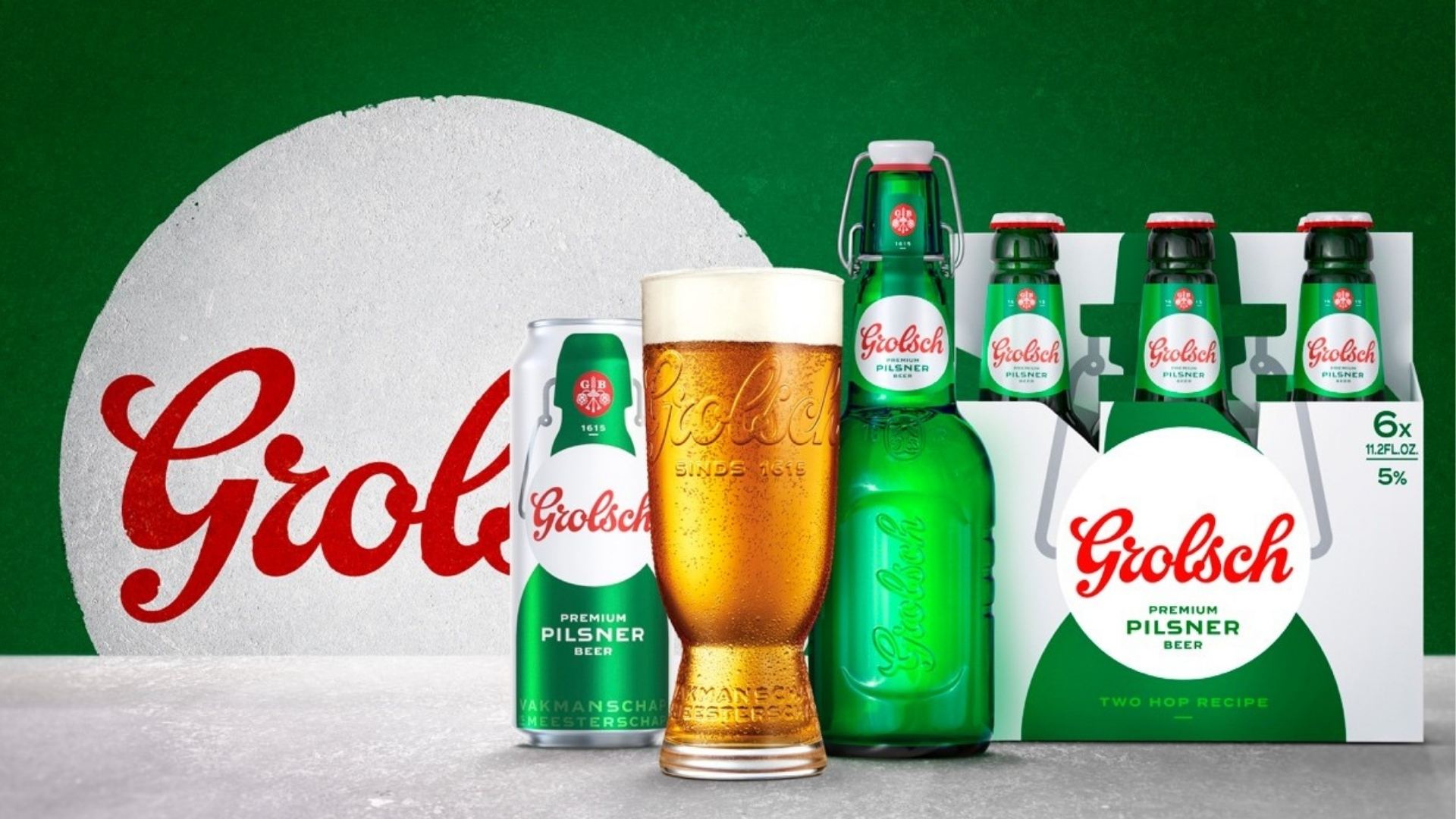 Grolsch Premium Pilsner returns to the UK market with a new proposition and new look to match the exceptional heritage of the original Dutch pilsner. Available to UK consumers from mid-September, the launch will be supported by a multimedia marketing campaign focusing on the provenance and quality of Grolsch Premium Pilsner - ‘Double-brewed, for double the flavour’ at its home in the Netherlands.

Grolsch is back as a 4% beer - answering a need from UK consumers for a product that delivers great refreshment at a slightly lower ABV, whilst retaining its distinctive depth of flavour. As well as drawing upon generations of Dutch brewing mastery, Grolsch Premium Pilsner achieves this through its ‘double-brew’ process – a double-decoction mash, using two hop varieties for bitterness and aroma, blended with two types of Dutch malt, and Enschede’s original Dutch spring water source.

Grolsch Premium Pilsner has been given a makeover for its return to the UK market, with a brand new visual identity offering great stand-out on-shelf and on the bar. This new look heroes both the brand’s long heritage and authentic Dutch provenance, as well as its iconic ‘swing-top’ bottle as the ultimate symbol of the uncompromising spirit behind Grolsch.

Since its inception in 1615, Grolsch has had an ethos of going against the grain and doing things its own way, sticking to its core values and commitment to substance. Its enduring character makes it distinctive and highly recognisable as a global brand worldwide, including 87% awareness amongst British consumers.

A new global visual brand design showcases the brand’s modern and distinctive style, while staying true to its authentic roots as the original Dutch premium pilsner. The new look elevates the swing-top as the central icon of the brand, placing its silhouette at the heart of the identity – including on the primary packaging - and using it to drive distinction. The Grolsch logotype has been carefully redrawn to capture the character and craftsmanship of the brand’s original hand-painted signs, returned to its heritage red and placed within a clean white disc. One of the brand’s earliest advertising lines, ‘Vakmanschap is Meesterschap’ (meaning ‘Craftsmanship is Mastery’) returns to the pack alongside the 1615 date, itself a reminder of Grolsch’s long brewing heritage.

The campaign celebrates Grolsch’s heritage as a pilsner brewed to deliver ’double the flavour’ and shines a light on the new visual identity. Following the golden liquid’s journey from inside the bottle into the glass, the campaign brings to life Grolsch’s ‘double brewed’ credentials - which uses two hops, two malts and double decoction (double brewed) to produce double the flavour. This highlights how the new 4.0% ABV Grolsch pilsner perfectly meets consumer trends of drinking better quality products, which deliver both refreshment and flavour, while at a lower ABV level. The campaign will be running on Social Media from October 2020 and on video-on-demand (VoD), social and digital out-of-home (DOOH) from Q2 2021.

“Grolsch Premium Pilsner is a highly distinctive brand that’s full of character and holds a special place in the hearts and minds of many British consumers. It is back with a fresh brand identity and a brilliant, revitalised liquid, now brewed at its iconic home in East Netherlands. The new visual identity and marketing campaign heroes this provenance and Grolsch’s exceptional brewing heritage, honed over many generations, whilst demonstrating its great relevancy to today’s consumer. The ‘double brewed for double the flavour’ message at the heart of the campaign has real authenticity which has shown to resonate well in our consumer research.”

“We have perfected a refreshing 4% pilsner for UK beer lovers, which has been brewed with passion and precision to provide extra depth of flavour. Our double brew process here at Grolsch - double hops, double malt and a double decoction - might take longer and cost more to do, but we believe it’s worth it – we like to say ‘double brewed for double the flavour!’”

Grolsch continues to innovate today with a modern brewery that has sustainability at its heart. It uses 100% green electricity, reuses brewery waste and cuts plastic use through innovative use of circular and recyclable packaging, including the use of plastic-free packaging to replace plastic shrink-wrap and six-pack rings.

Grolsch is available in 60+ countries, with sales of over 350m euros. The Netherlands is the brand’s homeland but beyond this: Canada, Argentina, Russia, Germany, Poland, Romania, Chile, France, Spain, South Africa, South Korea, Taiwan – and the UK - are key markets. Whilst Grolsch is the #3 brand in the Netherlands, in Export countries, where premium beer lovers will see the new modern and distinctive design, Grolsch is the #15 premium beer brand.

Asahi UK is a subsidiary of Asahi International Ltd and is responsible for sales, marketing and customer operations across the UK and Ireland. Asahi UK aims to enrich consumer experiences through innovation, high-quality service and an exceptional portfolio of premium beer, ale and cider brands including, Asahi Super Dry, Peroni Nastro Azzurro, Grolsch Pilsner, Meantime, Fuller’s London Pride and Cornish Orchards. The Woking based business is focused on developing quality, super premium brands and delivering commercial value in the marketplace, through a strong belief in collaboration, customer excellence and people development. For further information, visit www.asahibeer.co.uk